In the ‘old’ days I always wrote Christmas letters and Christmas cards. So now I thought it would be nice to send you a little about what is happening in my life. Some of you, of course, were part of it some of the time:

The year started with attending my granddaughter, Camille’s birthday in Fyn (Funen). We came 10 people from Copenhagen. It’s approximately 3 hours drive from the island of Sjælland.

After that I went to London attending writing workshops for 3 months. The first one was writing for children in CityLit with my old group and one in Mary Ward at an adult workshop (where I still read my children’s story.). I stayed, as usual, with my beautiful friend Sue, who kindly had kept the room free for me. The one I normally rent in her house in West Hampstead.

It is always beautiful staying with Sue. She ‘drags’ me along to a lot of interesting things, her book group, with whom I participate, when I am in London, the nvc (Non-violent communication) group, the choir and films and theatres.  And not to forget the Camden Lets scheme. Things I never do at home. The only thing she does not do is coming with me to the swimming pool!

The first week-end in London I participated in a Compassionate Communication workshop with the other ‘giraf’ people in my nvc workgroup. It was a fantastic workshop and I learned a lot.

I hated to leave London, but my family is in Denmark, so I returned home to my grandson, Scott’s 7-year old birthday. 2 week’s after that we all went to Camille’s confirmation. She has so much family in Fyn. It is difficult to keep track of who is who. But beautiful church service (even though Scott yawned very loudly) and fantastic food and speeches afterwards.

Living here in Helsingør (Elsinore) is especially beautiful in the summer. Five minutes bike ride to the beach!

As usual I was in India in November 2011 and hope to return for a longer period in the Spring 2012.

In July there was a follow-up on the compassionate communication workshop in London. I had mentioned to Camille and her mother, Britta that I was going. They decided to come along for a short holdiday. I stayed in Sue’s living room (the other rooms were rented out) and Camille and Brita stayed in a b&B nearby. I must say I saw London. We went to all the tourist attractions (and queued!). The best was the cable car across the Thames and the Harry Potter exhibition at Warner Brothers studios. That was really amazing and can be recommended.

Britta and Camille went home a couple of days before me, so I had time to meet with friends and people who wanted to attend the writer’s retreat I was having at the end of August in my family’s summerhouses. And surprise of all surprises, I met Kieran, who previously had promised to publish my book about the calf. Something went wrong in the negotiations – but we now agreed and he left me with a whole list of things I had to do.

The meeting was arranged by Lucie, whom I first knew as a homeopath (she always make up my remedies when I go travelling) but who has now become such a beautiful friend. And I hope she will come visiting here in Denmark one day.

Coming home I went for ten days to my friend’s summerhouse outside Gothenburg in Sweden. All I did there was writing, writing and writing, going for a swim and sunbathing. Beautiful time. Ingrid, my friend came out for a couple of days. But else I was there alone. No shops or towns around.

Back home in Denmark I worked hard on the book and the organizing of the retreat.

The retreat was fun. First week we were only three. Eva from Helsingør and Steve from London. Beautiful week, we really worked hard. When Steve left he and I made a deal. He would look through my film script and I would knit him a sweater. I did. The result can be seen here.

Oh, yes I forgot to tell I joined a knitting circle at the library. It’s fun and I don’t feel bad when I watch TV ‘cause I can knit at the same time. And people get nice gifts.

On the second week of the retreat 3 people came from London, people I had worked with in Mary Ward. But it was strange, I hadn’t thought of it beforehand, but the London people were not used to be 5 kilometers away from ‘anything’, i.e. shops, bars etc. and the nights were very dark. But the beach was only 20 minutes walk away and the roads were lined with damsel plums. So a lot of creative desserts were made.

After the retreat I worked hard on the book to make it ready to send to Kieran, so did Anja, my niece who has made the beautiful drawings. I just had a mail from Kieran that he is now typesetting it.

In September we had bad news. My eldest son, David, Camille’s father had to say goodbye to his father, who sadly died.

Now Christmas is coming near and I’m busy knitting presents and getting fed up with my head which is full of moving. I’m moving flats on 18th January. A very short move, from the 1st floor to the ground floor next door. I’m asking friends for help and having a party, so I’m going to be very busy cooking in the holidays.

Seen from the outside this was my life. A little boring maybe. From the inside it is very, very beautiful. So love to all of you and I hope you will all have a beautiful life, even in the ups and downs.

Lots of love to all of you

It is so exciting. My new book , That was the night – Det var den nat, skulle komme i juni. 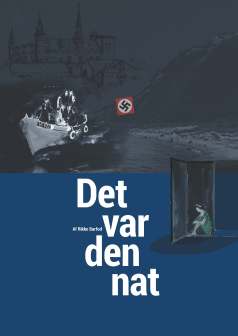